Join my indiegogo campaign to preorder the book and check out some cool perks.

You probably know at least one pattern of the pentatonic scale — there are five; and you may have heard of the CAGED system. In this class you will learn how the five pentatonic patterns overlay the chord shapes of the CAGED system and how you can use them to create solos and make your rhythm more interesting. By the end of this class you will be familiar with all five pentatonic patterns and understand how to navigate them in one, two, and three chord grooves.

Blending these two aspects of guitar navigation will bring new life to your playing and get you out of the pentatonic rut that so many guitarists find themselves in.

In preparation for this class participants should learn and review the five pentatonic patterns — there are many sources on the internet and I’m happy to send them to you as well.

THE GUITAR OF ROBERT JOHNSON

Robert Johnson is considered the most influential of the early blues men. His haunting vocals and spectacular guitar playing have inspired musicians for decades. In this class we will explore several of his compositions in both standard and open tunings (A, G and D(E) minor). Topics include: fingerpicking style, chord variations, shuffle rhythms and slide guitar.  Songs:

From Four Until Late

If I had Possession over Judgement Day

Hellhound on My Trail

Ramblin' on My Mind

TrueFire channel is still live and growing. The latest lessons include Memphis Minnie's "Drunken Barrelhouse Blues," and  "Using a Metronome for Fingerstyle Blues."TrueFire

Check out my True Fire channel: access to lots of TABS, videos and acoustic blues guitar education. The focus is on fingerstyle blues. Learn to play:

• Lots and Lots of songs!

I also teach private lessons at my studio in Berkeley. E-mail or call me for rates and availability. 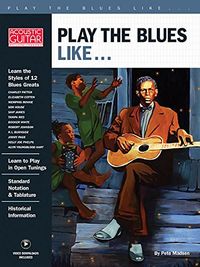 This book shows you how to play in the style of 12 different blues and blues-inspired artists, such as: Robert Johnson, Charley Patton, Skip James, Alvin Youngblood Hart, Memphis

Minnie, and many more. The book was written in conjunction with Acoustic Guitar magazine and published by Hal Leonard.

WHAT PEOPLE HAVE TO SAY ABOUT PETE MADSEN'S TEACHING:

I'm a beginning guitar player and have been Pete's student for a few months and wanted to write him up here because I couldn't imagine having found a better teacher. I tried a few other people before going to Pete and the difference is amazing. While most guitar teachers know how to play, Pete also knows how to teach.
He's great at explaining things, great at showing technique, he sends an audio recording of each lesson to your email address (a HUGE help), and teaches you songs that you want to play. In addition to all this his rates are good and he's a cool, easy-going, guitar-loving guy…
--private student

looked forward to the class every week. Even though we were at different skill levels, Pete provided each of us with personal attention which inspired us all to practice. It was fun and rewarding to see myself (and all the other students) improve over the period of the class. Highly recommended!
Bob, student from class


Pete Madsen’s blues guitar classes at the Freight are just great! You learn a lot, and it is incredible fun. I honestly cannot get enough!
– student from class

Thanks for the good video on_ your blues lesson. You explained clearly and broke it down just enough keep up the blues lessons friend God bless

jo bro you helped me so much understand more about_ fingerpicking and syncopation. please keep on teaching man, your one of the best around…
--youtube comment


Took Pete’s Acoustic Blues class.......it was everything I hoped for. He really helped me wrap my head around the fingerpicking that had eluded me for years....thanks again!
I'm looking forward to studying with him again in the future.
-- student from class