Back to all posts

Yeah, I went south....by Northern Californian standards, anyway. Took a quick road trip with my friend Teja Gerken, former gear editor with Acoustic Guitar magazine, down to visit National Guitars and LR Baggs pickups. Teja is on the skds. He lost his job at AG and is now slumming it by hanging out with the likes of me. Actually, I think T's layoff wiil be a bit of a boom for his independent writing career. Hard to imagine him being idle...in fact, the purpose of our trip was the writing of an article for a German magazine for whom Teja is working. Apparently, the German magazines pay fairly well...

Both Baggs and National are located in and around San Luis Obispo, CA. SLO is pretty much a college town with quick access to Pismo Beach and surrounding environments. It has a touristy downtown and a very pretty campus where you would feel entirely at home wondering with abandon. Safe, secure...Curiously, we stayed at a dump of a motel. If you ever find yourself in SLO  avoid the Homstead Motel, which is located directly next to Hwy 101/1. Upon entry into suite 114 my nostrils were inundated by the smell of what I thought was cat piss. Teja assured me it was a cleaning product. Really!? I vow to never clean my house with whatever product that was....Luckily, we spent very little time at the hotel. Our first stop was Baggs. They were very cordial and took us out to lunch. For those of you who don't know, L.R. Baggs production line revolves around amplifying acoustic guitars. They manufacture many diiferent styles of pickups for acoustic guitars. Unfortunately, amplifying acoustic guitars, in my mind, is a no-win situation: you can never truly capture the sound of a great acoustic in a pickup. Unlike electric guitars, which depend on an ampliflier to "color" that sound; an acoustic guitar sounds best "unplugged."

I have tried many different pickups and amplifiers over the years, but my acoustic guitar sounds best when it is played acoustically and then, when necessary, miked and fed through a good PA system. Long and short of it.

Which provides a nice seguay to our trip to National Guitars. The original National Guitar company started producing guitars in 1927-28 with the desire to produce an instrument that could compete in volume with horn players and banjoes. These first guitars were made of steel or brass and had incredible volume -- remember electric guitars were still 10-15 years away. They also had a characteristic sound that we have come to associate with blues slide guitar and Hawaiian-style guitar playing. The original design and manufacturing of these guitars is an interesting story in and of itself, but I don't think I could do justice to it in a short blog piece. Suffice to say that in the late 1980's Don Young decided to restart manufacturing the  guitars based on the original designs, and when possible, using equipment from the era. The result is a company that is thoroughly dedicated to producing quality instruments using the best possible parts. I was also impressed by the fact that the company does not have a sales or marketing department -- the same folks who design and build the instruments and prototypes are the same guys who take the orders and build the website; everyone at National is "hands-on."

Below is a picture of Eric, Teja and Don from National 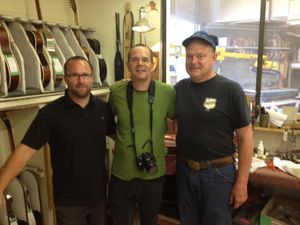